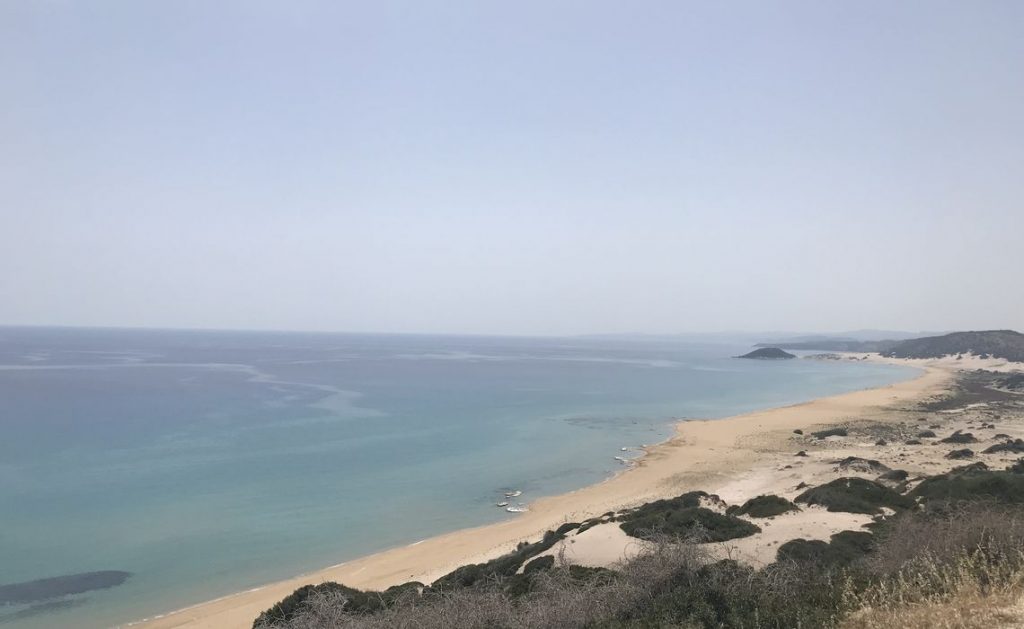 Some say North Cyprus is the Cuba of the Mediterranean Sea, some say that is a secret that’s best shared and some say is the new place to be this summer. Here’s why.
Like any other Mediterranean destination, the sun shines here 300 days per year, with a summer that starts in early May and ends in late October, meaning that in these entire period your North Cyprus sunbath should offer the perfect tanned skin. And what’s more, there are plenty of activities to do besides enjoying the crystal blue waters of Mediterranean Sea.

Glimpses of history
The third island of the Mediterranean Sea is currently separated into North Cyprus, which identifies as Turkish, and the southern half of the island which identifies as Greek. Between the two regions, a  border has been in place since 1974. This separation has led development to happen differently, giving the Greek part the possibility to become part of the European Union, while the north is currently developing and transforming into a wow zone of attraction for tourists. For a period of more than 500 years, the island was under Richard the Lionheart, the French Lusignan family, the Ottomans and the Venetians, each of them giving the island some unique and very interesting savours. Later on, in the mid-19th century Britain took over due to the fact that the Suez Canal was opened to protect the trade route to India. They built new roads, pipelines, crop irrigation and railways. Cyprus’s independence being declared in 1960, while North Cyprus declared its independence from the south in 1974. Take into consideration that only few states of the world recognise North Cyprus as an independent country, but don’t worry, you can cross the boarder with your passport without problems.

The five stars experience
Currently, important investments are being made in North Cyprus, where a dozen 5 stars hotels are attracting more and more tourists each season. The hotels are huge and have all the facilities included, with packages all-inclusive or ultra all inclusive. Connoisseurs say it’s the new Antalya at smaller prices, having the top services for your needs in a place where sun happens to shine 300 days per year. What’s more, it’s a great destination for families, most of the hotels offering amazing experiences for children also.

Another interesting aspect is that these 5 stars hotels have some particularities which helps you pick the best for you, such as infinity pool, water park, impressive varieties of food, Turkish parties, babysitting and so on. Moreover, the majority of the hotels’ description specifies if is suitable for families, couples or honeymooners, and the photo gallery is accordingly to the reality.

Attractions
If you want to step outside the world of SPAs, luxury and opulence, you will understand why some say it’s the Cuba of the Mediterranean Sea. The scenery is breathtaking: mountains meet sand and the sea, wild donkeys can be fed by you and seem quite friendly and from any road, the sea can be spotted, making it a great journey. North Cyprus lifestyle is rather modest, with small villages and authentic village life. The Turkish Cypriots are quite friendly, making you feel comfortable when inviting you at their homes. How come? Some hotels offer this experience as extra: you can book a gastronomic experience such as baking traditional bread, making hallumi cheese or even picking up strawberries from locals’ gardens for prices starting from EUR 5, transportation not included.

One of the best attractions for tourists is the jeep safari – an experience which led you to wild beaches where you can see turtles ambling ashore as they lay eggs and nurture their baby turtles. Their season is from May to September and locals seems to make effort to save the turtle population which decreases year by year. On the way, you can stop to see some ancient history still preserved – old thumbs and reminiscence of their form of living. The costs start from EUR 40.  For history lovers, North Cyprus is a jewelry. Starting with Nicosia, the only capital divided in the world. When Cyprus split, Nicosia got a border, which you can now cross on foot via a checkpoint if you’re curious what the south of the island looks like – by passport only. The part that represents Turkish Cypriots has bustling merchant streets, tavernas where Efes beer washes the hot days, cheap international brands with big logos in every corner and people selling baklavas and other Turkish delights, as well as some emblematic architecture, courtesy of all those who passed by the beautiful Mediterranean island.

Kyrenia Castle is also must see due to the impressive view over the harbor and the sea, but also for the Shipwreck Museum, which exhibits the remains of a Greek merchant ship from the 4th century BC, one of the oldest vessels ever to be recovered, together with its cargo. If you ever played the PlayStation Portable game Assassin’s Creed: Bloodlines, the action takes place in Kyrenia and the castle so it’s quite interesting to discover it offline, too.

A must stop is Bellapais Abbey, or “the Abbey of Beautiful Peace”, is the ruin of a monastery built by Canons Regular in the 13th century on the northern side of the small village of Bellapais, about five kilometers from the town of Kyrenia. The ruin is at an altitude of 220 m above sea level, and commands a long view down to Kyrenia and the Mediterranean sea.The site is also a museum, which hosts a restaurant and a cafe.

But the most incredible place in North Cyprus is Famagusta, which was the island’s most important port city and a gateway to trade with the ports of the Levant, from where the Silk Road merchants carried their goods to Western Europe. Moreover, some of the most beautiful beaches are in Famagusta, but forbidden to the public due to the conflict which still stands since 1974. Varousha, which used to be part of Famagusta, is currently a ghost city surrounded by the army. Before 1974, Famagusta developed toward the south west of Varosha as a tourist centre. In the late 1960s Famagusta became a well-known entertainment and tourist centre, with over 50% of the total hotel accommodation of Cyprus, acting as the main tourist destination. The place was a favorite destination of celebrities such as Elizabeth Taylor, Richard Burton, Raquel Welch, and Brigitte Bardot.

Famagusta’s historic city centre is surrounded by the fortifications of Famagusta, built mainly by the Venetians in the 15th and 16th centuries. Moreover, in the old city centre an imposing cathedral building stands, but inside is a mosque, the Lala Mustafa Pasha Mosque, originally known as the Cathedral of Saint Nicholas. It was consecrated as a Catholic cathedral, but converted into a mosque after the Ottoman Empire captured Famagusta in 1571 and it remains a mosque to this day. And the contrasts are quite spectacular inside.

North Cyprus is also a gastronomic journey between Greek and Turkish food. A great variety of vegetable dishes, grills, pastry, fish, soups, kebabs, lahmacun, pides are in the menus. There are many local restaurants that serve traditional “meze”. This consists of many small dishes of hot and cold food that is brought to your table as a starter. The foods severed include “cacik” (yogurt and cucumber) humus fried halloumi (local cheese)  “sigara borek” (cheese and mint wrapped in filo pastry and deep fried) and olives to name a few. Main courses normally include sis kebap (chunks of lamb or chicken on the skewer), lamb chops, grilled chicken, seftali kebap (Turkish sausage) or fish. And, of course, baklava. Editor’s tips: ask the locals for beach restaurants with fresh fish. It will be one of the most impressive culinary experiences you’ll taste, trust me.

Getting there
The best way to get there from Romania (for example) is via Larnaca airport, where both Tarom and Wizz Air operates regular flights. From there, you can rent your own car to North Cyprus – but be careful because not all the rent-a-car companies offer the North Cyprus package or you can have the airport-hotel transportation included in your all inclusive package. Once in North Cyprus, the accommodation is very varied, ranging from Airbnb apartments to five-star hotels.

N.B. This Article was published in the spirit of ONE CYPRUS. Comments of a political, religious or derogatory nature will never see the light of the day